NewsUs As A Landscape, Recent Figures for the Film My Blue Suit
Geoff McFetridge 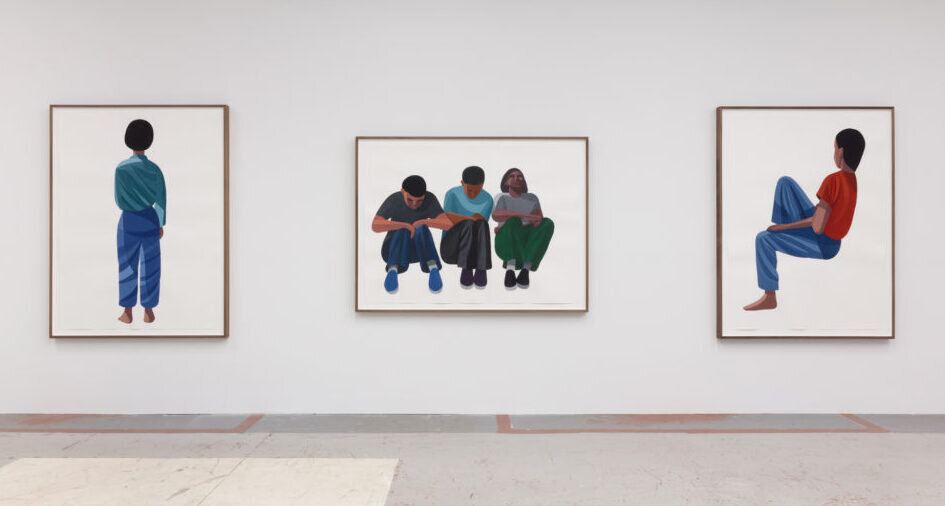 In times of isolation, even the most mundane of interactions feels significant and exceptional. Geoff McFetridge’s solo exhibition, Us As A Landscape, Recent Figures for the Film My Blue Suit, displays the artist’s paintings of people in public spaces. In elevating everyday moments as visual art, McFetridge’s figures explore the connectedness and unfamiliarity of strangers. Bringing them to the gallery’s space gives visitors a chance to meet them and build their own narratives.

The exhibition is comprised of a series of images of people featured in My Blue Suit, a short film made by McFetridge, depicting stylized, painted figures in still settings. The figures inhabit various interiors or landscapes, and their unique, expressive poses mimic the shape of the backgrounds in which they are placed.

The artist’s style is bold and colorful, using simplified, flat forms and stylized details. His figures are inspired by the film’s landscape and the folds of their clothes resemble its outlines. By skirting around figuration and individualized features, the figures are painterly and dynamic, dreamy and peaceful. Set against blank backgrounds, they jump out at the viewer, instantly catching their attention.

The blank backgrounds evoke feelings of introspection, and their starkness simultaneously suggests isolation and separation. Many of McFetridge’s subjects are positioned horizontally, creating incredibly intimate and candid moments juxtaposed with unfamiliar faceless figures.