Artist uses tobacco to explore concepts of land, property and history at the Museum of Modern Art 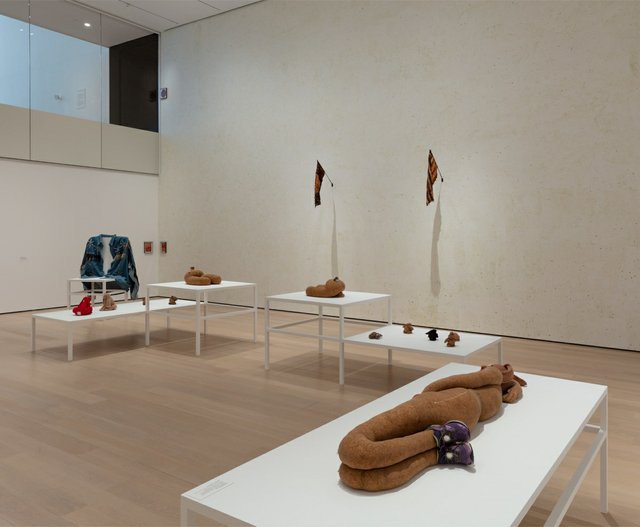 The first thing you encounter when you enter the street-level gallery at the Museum of Modern Art that contains Gabrielle L’Hirondelle Hill’s first solo show in the United States – even through your mandatory mask – is the musky, sickly sweet aroma of tobacco leaves. The smell emanates from objects and drawings fashioned from the plant in many forms: shredded as stuffing for bulbous pantyhose sculptures that sit on pedestals around the room; smoothed out and sewn together to make tattered-looking flags whose proportions replicate the U.S. dollar, hanging high on poles mounted to the double-height walls; mixed with Crisco and other materials gleaned on walks around her neighbourhood and collaged into works on paper that the artist calls “spells;” and even in the form of commercial rolled cigarettes, sewn onto a blinged-out, giant-sized jean jacket draped over an equally gargantuan chair.

Hill, who is Métis and lives and works on the unceded lands of the Sḵwx̱wú7mesh, Musqueam, and Tsleil-Waututh peoples (otherwise known as Vancouver), is, shockingly, the first Indigenous artist to receive a solo exhibition at MoMA in the almost-century since its founding – on a site a couple of miles from a former Lenape village called Sapokanikan, or “tobacco field.” The artist’s decision to focus on tobacco allows her to tie together this and other histories while still hewing to her long-standing interests in concepts of land, property and history – both in terms of the conflict of settler culture with Indigenous ideas, and the survival of those ideas despite a centuries-long genocide.

Tobacco, prior to colonization, was one of the most widely traded materials in the Americas – part of a gift economy – and became, too, a form of currency for English settlers, but now tied to exploitative and extractive transactions. It was a lucrative cash crop for Europeans and, eventually, for American plantation owners, who enslaved people of African origin in its production. And, over time, it has become a reviled product in some quarters, attacked for its carcinogenic properties. The titles of Hill’s work allude to the persistence of Indigenous uses of tobacco, though in the most telegraphic ways: Exchange, Gift, Offer, Purse, Trade. Elsewhere, titles seem to allude to the fate of the societies and cultures who suffered the violence of colonization – Disintegration and Dispersal. The cigarettes that decorate Desperate Living, for E.S. (2018) reminds us that bumming a smoke is one of the few widespread instances of the gift economy that endures in contemporary culture, both among Indigenous peoples and non-Indigenous.

And then there is Counterblaste (2021), a slightly larger than life-sized odalisque figure with rabbit ears and multiple breasts sprouting from its torso, fashioned out of pantyhose and tobacco, and adorned with charms, beads, rabbit-fur earrings and other items. The title refers to a tract written by King James in 1604 – a screed against the “vile custom” of smoking the stimulant, but also against the Native Americans who introduced the practice to Europeans. The irony of this text – alluded to by the odd sexiness of Counterblaste, along with two nearby soft sculptures of the curled-up legs and lower torso of a woman’s figure, one with a delicately beaded anus and the other with a labial slit traced out with cigarettes – is of the “I’m rubber, you’re glue” variety: the king rails against Indigenous people for their dirtiness (when venereal diseases were introduced by colonists), their excessive sexuality (when they were raped and exploited by colonists who assumed their sexual availability), and their refusal to adopt European forms of monetary exchange (“preferring glasses, feathers, and such toyes, to golde and precious stones”) as if one token of value is objectively more valuable than another. Meanwhile, Hill’s rabbit woman freely offers her teats up as sustenance (to us, or maybe to the small stuffed bunnies perched on other pedestals?) and as a reminder that there are other forms of worth we might draw upon to remake our broken world.