Brie Ruais: The Measure of All Things by Leah Ollman. 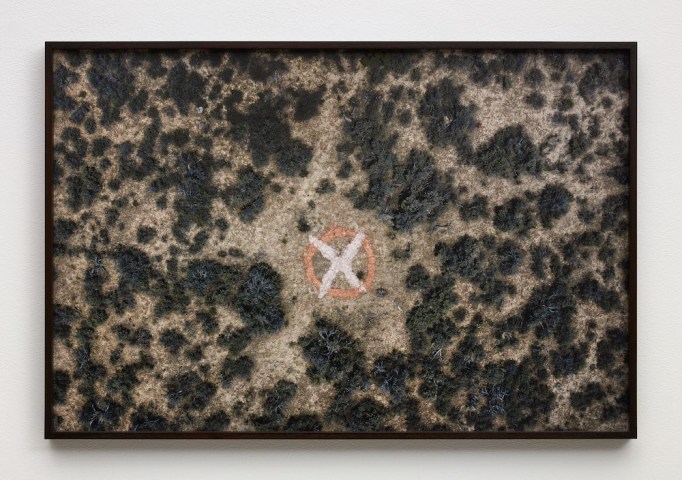 For the decade that Brie Ruais has been pressing and prodding clay into sculptural works, each the equivalent of her body weight, her art has asserted an implicit material connection to the earth. Recently, the Brooklyn-based artist has made that connection to land explicit. In a series from 2018–19, Ruais mapped her garden, Borges-style, her clay record of the area at one-to-one scale with the terrain represented. Ruais spread her earthen matter of choice over paving and other earthen matter, imprinting the clay with the pressure of her hands and feet as well as plant material from the site. As has been her method, she then cut the irregularly shaped slab into sections, applied glaze selectively, fired the tiles, and regrouped them on the wall. Ruais’s work has long chronicled the process of its own making; now it also chronicles place.

The pieces shown at Night Gallery—sculptures, photographs, and an installation (all 2020)—derive from road trips to the Western states. Reviewing a Ruais show in Los Angeles in 2014, I wrote that she made “earthworks on the scale of the individual body.” Her own weight continues to serve as a metric, while her own knuckles, knees, fingers, and toes remain her tools for shaping spirals, C-curves, and centrifugal patterns. But now the scale and scope of the work have expanded with Ruais’s adoption of the Great Basin in Nevada as both source and setting. The shift aligns her ever closer with site-specific, process-oriented, performative precedents of the ’60s and ’70s by artists as diverse as Michelle Stuart, Judy Chicago, Ana Mendieta, and Richard Long.

Four color photographs in the show, shot with a drone-mounted camera, offered aerial views of unfired sculptures Ruais made and left in situ. These ephemeral interventions, primal marks of presence acted upon by weather and time, call attention to geological phenomena as well as to functional purposes assigned to the land. The pictures’ elevated perspective flattens the scenes and reduces Ruais’s rugged gestures to pictographs, resonant with other distilled features nearby, including the lines of animal and vehicular trails. Three Seasons Passed looks down upon a letter X in clay that has devolved into a pale rust tattoo on the desert’s bleached, parched skin. Another image depicts crosshairs that Ruais has drawn in clay in a clearing. Aerial surveillance is cast here as an instrument of dominance and threat, with the land itself as target.

Several of the wall-mounted sculptures in the show incorporate rocks Ruais gathered from the desert, which added emphatic punctuation to the already dynamic swirls and bursts, glazed in painterly swipes of pewter, wine, jade, and milk. An installation constructed in the gallery, a long, low rock wall imposing a border between unfired stoneware starbursts on the ground, one white, one reddish-brown, introduced metaphors of social critique, in its form and title: The things we build, the things we let fall apart, the things we destroy.

Ruais’s work has a palpable, here, now immediacy. Even so, it assumes a kind of conceptualizing distance, a meta-perch over the essentials of time, place, raw matter, motion, the body. Ultimately, what she sculpts are the pulsing energies and directional forces animating it all.

To read the full review visit Art in America.