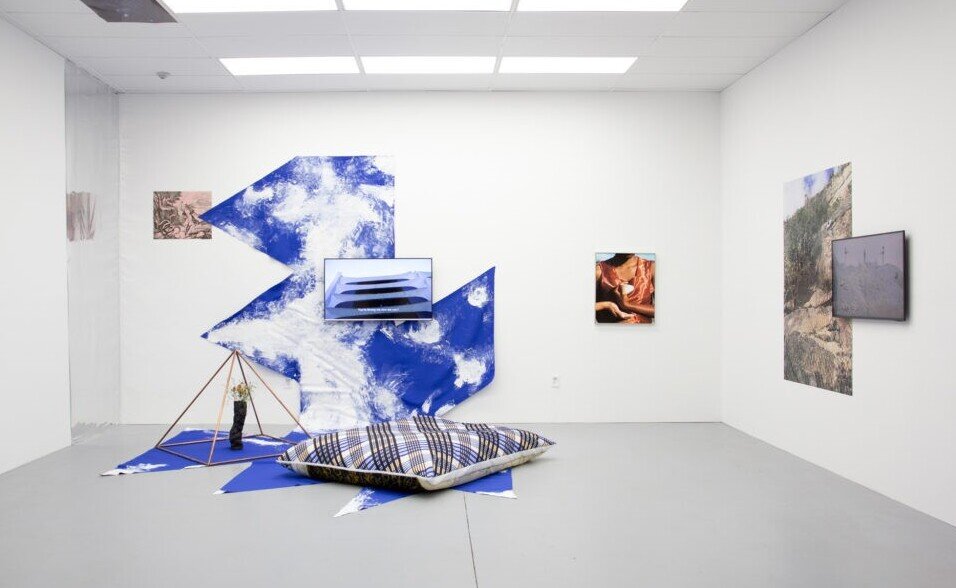 The title of the exhibition at Cooper Cole Gallery, Separate/Together, calls to mind the feeling of being separated but together, a feeling that all of us have experienced during the pandemic lockdown. What happens when separate materials are combined in a new way? Cooper Cole Gallery presents the group exhibition Separate/Together, featuring both Canadian and international aritsts: Gaëlle Choisne, Sharona Franklin, ektor garcia, Maureen Gruben, Raven Halfmoon, Gabrielle L’Hirondelle Hill, Jennie Jieun Lee, Brie Ruais, Fin Simonetti, Eve Tagny, and Sami Tsang.

When you walk into the gallery, there is a life-size human-like bunny made of tobacco wrapped in pantyhose lying on a table. As you turn to the back, you would be surprised that it wears a pair of old running shoes, a staple for a busy mom. The bunny has feminine characteristics with eight nipples, red lipstick, and two long ears resembling long hair. This sculptural work is made by Gabrielle L’Hirondelle Hill whose “works have used found and readily-sourced materials to address concepts such as private property, exchange, and black-market economics.”

The title Counterblaste references to a treatise called “Counterbalste to Tobacco” written by King James VI and I in 1604. The treatise criticized tobacco for its negative impact on health and blamed the colonies for bringing tobacco to England, when people under England’s colonization were exploited and enslaved to grow the crop with lands taken away from them. In fact, tobacco is celebrated and used for “gifting and ceremony” in the indigenous community that L’Hirondelle Hill grew up in. She tries to understand how traditions can somehow survive colonization and capitalism. The artist asks the viewer to remove the hatred and stigma associated with tobacco and reconsider the meaning of tobacco as the flowers bloom in the bunny’s eyes.

In the basement of the gallery, you will find a video of Maureen Gruben performing a large-scale land art. From above, the vividly red broadcloth arranged in a zigzag pattern against the white snow looks like the land is sewn together with a zigzag stitch. Making the artwork is undoubtedly labor-intensive. According to Gruben’s website, three hundred meters of broadcloth is placed in 111 ice holes, stretching nearly a thousand feet long on the frozen ocean of Ibyuq Pingo. In most of the video, you can only see the broadcloth, but the footprints beside it suggest an invisible artist. There is a sense of vastness of the land and one’s intimate connection to it.

“Ibyuq has been a site of profound comfort and healing throughout Gruben’s life.” Kyra Kordoski wrote that “the work simultaneously evokes suggestions of traditional clothing and means of subsistence; the strength of family and community; and the potential for healing, and for being healed by, the land.”

Speaking of body and labour, Brie Ruais’s series of Star Made by Punching the Sky sends a more powerful message. The silver color of the stoneware adds a hard texture like a steel which not only represents the shiny star but also makes the punch full of energy and action. Ruais always pays attention to her weight and its reaction on the clay that sometimes resists or takes in her movement. Ruais says that “the work is about what happens when one’s body is overcome by a physically demanding process…We are forced to remember that making something sometimes requires the laborious use of the body.” As everything is felt through a screen, the physicality of this piece is a reminder of the ability of our physical body to create materials.

Sami Tsang’s Still We Rise is a rather disturbing sculpture that materializes the artist’s “internal questions and traumas,” mainly her conflicting identities and experiences of growing up in both Chinese and Western cultures. The sculpture’s hair looks like queue which is a hairstyle in the Qing dynasty. The front portion of the head is shaved while the back is a single braid worn very long to the hip.

Tsang was born in Canada and raised in Hong Kong. After Tsang moved back to Canada at the age of 12, the artist began to resist her traditional and conservative role. She tries to confront her family shame that is not allowed to talk about in Chinese culture. Tsang says that “when my heart allows, I convert these stories through the work of cartoon-like gesture into bearable, yet straightforward imagery to reveal the raw emotional experiences we share.”

Separate/Together at Cooper Cole Gallery incorporates a range of sculptures and videos, all exploring the issue of materiality and the artists’ interpretations of it. The artists have deeply thought about objects’ origins, how objects are used in politics and activism, and their connections to the greater material culture.