Down at the Arcade 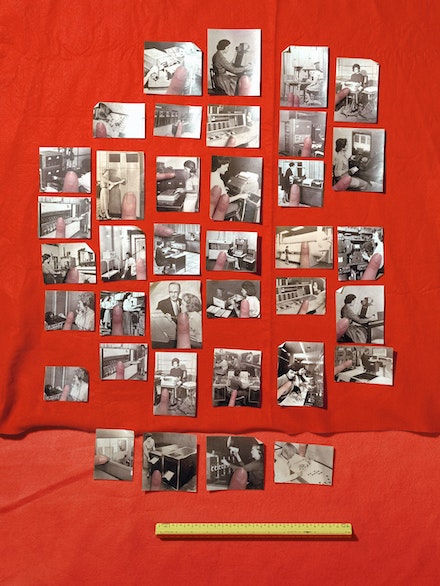 My work often starts with hundreds of pages of text and thousands of images that get distilled down to a few minutes of something. I do think it comes from some existential impulse to save everything, which is a product of our time—we’re always screenshotting and taking pictures and saving everything, creating our own individual archives that we will never have a chance to go back to and address. I have been thinking about this accumulation a lot this year, especially as things have moved inside, going back to my computer and making work from what I already have, parsing ideas and images that get formed around a public eye or a shared way of seeing, which is always based in politics.

My way of working comes in part from my design and editorial background. Working at the New York Times, I would often watch how images go out into the world and develop a different meaning than what was intended by their makers. That has been the root for much of my thinking: picking apart how popular images work, how they shape the way we see ourselves and the world, how they become tropes, and how language gets turned into images and vice versa. Things begin to repeat themselves. Central to my work is the idea of kitsch, but not in a traditional sense, in a sense that things get simplified and distilled down into easily digestible ideas and images, that they get formed around a public eye or shared way of seeing which is always based in politics.

The aesthetics of Instagram and of other internet worlds feel more relevant to me now than the sort of mid-century nostalgia that I was interested in at first. We always live in nostalgic times, but I think the stress of this moment, the fact that we feel we don’t have any history to grab onto that actually means anything to anybody makes for a very nostalgic set of aesthetics, coupled with a massive online graveyard.

In Red Film (2018), I tried to get at the feeling of being stuck in loops, that we’re being presented with what seems like endless choices, but the choices are all predicated on a set of rules that are handed down to us. For example, being able to choose which toothbrush you want isn’t really a freedom or a choice! I wanted to create a film that evoked these cycles of receiving the same thing over and over again, with slight variations, and how this feels like both a pleasure and a trap.

For Performa, I first wanted a stream-of-consciousness-talking performance, where I could convey a constant wash of information, which is the sort of register I’m also trying to get at in my films—as soon as one idea ends there’s another one. I thought there could be something really seductive and satisfying about those meetings happening in real time, instead of in post-production. So, I’m writing a script to be performed. It will be written around a set of images, and will build to one big new image over the course of the performance, using structures and apparatuses from my studio, like conveyor belts, rolling stands, and moving walls. It will be about an endless set of tasks that don’t seem to amount to anything, but are as useful to do as anything else.

I was very influenced by Shoshana Zuboff’s The Age of Surveillance Capitalism, and the idea that because there’s no precedent for all of our online actions being sold to basically three big companies, we’re not doing anything about it. She says that our privacy and interior lives are going to be eroded to the point where we can no longer form identities or have the privacy that we need to feel like humans. I want the performance to weave in some of those themes, but also touch on the pleasures that might make us ignore why we sign our privacy away. We need a certain amount of seduction in order to move forward in the sometimes crushing landscape in which we find ourselves, and there is something redeeming to be found here too.

I’m hoping to have a giant wall that I’ll be building on. It’s about building up this new image while I’m working through themes of decay and sadness. The redemption will be found in the images, in the making and doing tasks with them, in making something new. There will be different modes of bringing in images and objects, so sometimes an image will be rolled in on a C-stand, other objects will come in on a conveyor belt, or a performer might come in and start building an image alongside me for a moment. But it will all be directed by the script, which will be sourced from advertising as well as a personal text, which will dictate how the images come into play. I’m hoping things can come from the ceiling, from every direction.

I want the audience to think about the complications and contradictions of living in our moment and wanting or buying anything at all. I hope that someone might leave more confused than they came. I want it to have a steady marching beat, to feel like a pop song or a magazine, like something that’s much more pleasurable than thinking about how capitalism works. I’m trying to operate in this tricky mode of using the very tools that I’m suspicious of.

To view the full article visit The Brooklyn Rail