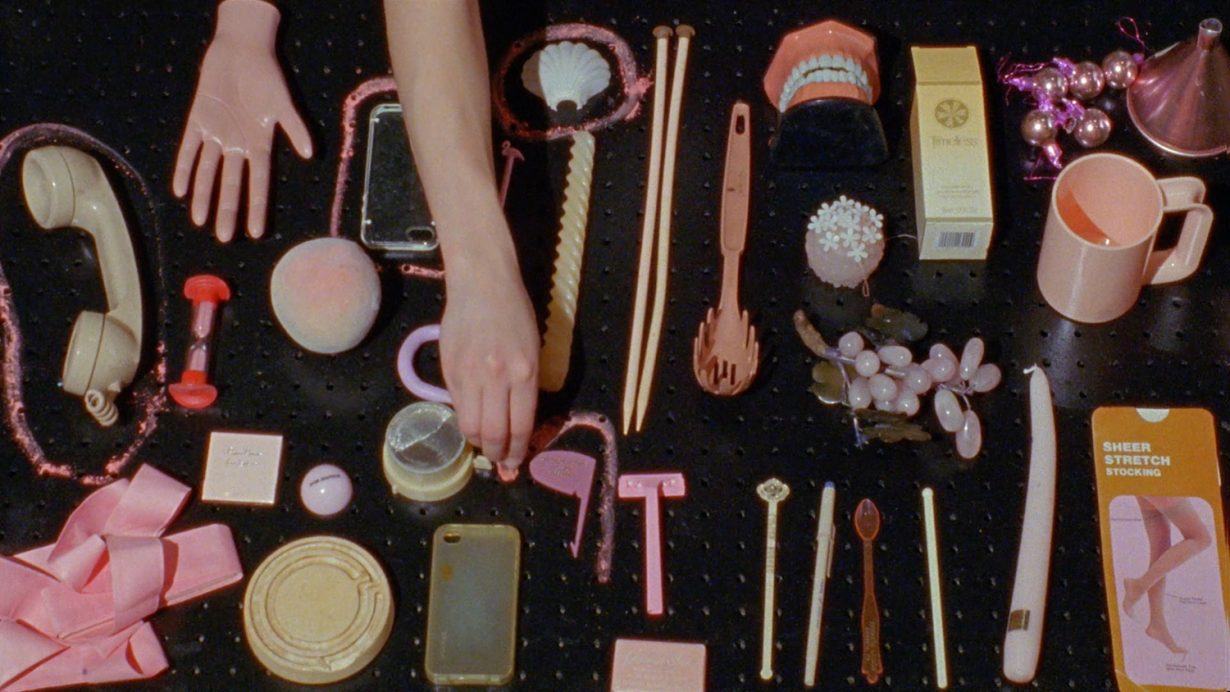 Odds are, you’re reading this on a screen. Maybe it’s late, and your phone or computer’s colour-temperature app has kicked in, giving the screen an orangey-yellow tint. Or you’re staring this down on a page through glasses or contact lenses of some fashion. Maybe you’ve had corrective eye surgery, or you’re relying on the unaltered lenses you’ve already got in your eyeballs. Your LED daylight bulbs, imperceptibly dimmed, cast a cold light on the page. The point is that there’s no way for this text to reach you directly. There is no unfiltered access. This isn’t a secret, but it is something we are pretty handy at ignoring, whether it’s reading or watching a film, or, say, interacting with other humans. We’re pretending that we’re piercing through life’s layers, perceiving things properly, accurately, truly. Sara Cwynar’s short Red Film (2018) doesn’t let us ignore this: it’s all filter. Over 13 minutes, two narrators barrage us with an overlapping tangle of thoughts on beauty, visibility and experiencing ‘the new’. They speak over snippets of imagery from various stages of product development in the beauty and advertising industries: makeup factories; a photography studio teeming with shoes, perfume bottles and jewellery boxes; a set of women having makeup applied, posing or dancing; a printing press. Everything is infused with intense greens, blues and, yes, reds. “A human being, a flower, a language, all have the task of wearing colour,” one narrator states enigmatically. We live bound up in the facades and confusions of the superficial sensory world; but, Cwynar’s film seems to ask, how do we actually accept that task?

You might call Red Film an essay film, or an audiovisual collage; a heartfelt, neurotic lecture; a feminist manifesto; a jumbled, extended elevator pitch; or a surreal, ironic advertisement. Or it is all of these things. It starts off coherently enough: “I’m talking about American patterns,” a male voice promises at the start. “And French painters,” a female voice quickly adds. A set of four dancers, dressed in red outfits, fingernails painted a vibrant red, dip, bow and sway. He goes on: “I am talking about the new woman, and a pattern which was invisible to the subjects when they lived it.” But as the film quickly reels on, it turns out that’s the closest we’ll get to an explanation. We’re left awash in lush imagery and verbose, momentary insights that are offered up only to be swept away by the next, sometimes so quickly they overlap: “My mobile body makes a difference in the visible world”. “Nostalgia wears a distinctly utopian face.” A parade of bodies and products flashes by, including a rotating bottle with ‘Red Roses’ written in gold on it, filled with some viscous, vermilion liquid; a pink suede shoe; a red convertible; a woman having blush applied repeatedly to her cheek. Occasionally, Cwynar herself will appear, red-faced and apparently hanging upside down, loosely lip-synching to the voiceover. “There’s nothing you could have done differently,” she mimes badly. “You are discovering yourself.”

There’s a warm, faded tinge to all the footage, shot as it is on 16mm celluloid and transferred to digital video. The haze adds to the familiarity of how it all sweeps over you, with the glamorous nonsense of a makeup ad, and the sweeping breeziness of a car ad, and through this stream of hyperconsciousness we might be able to pluck out some sense of what we’re actually being sold. Maybe you’d be interested in a set of moisturisers and mascara that all bear the name Cezanne, or a turquoise shade of eyeliner, or an idea that starts to unravel some of the basic premises of advertising and photography. “Remember that all scanners and digital cameras have problems with highly saturated reds,” we’re told at one point. A pair of lips fills the screen, as bright red lipstick is applied with a brush. “I’m telling you that these reds are not real.” The titular colour of the film, it turns out, is a stand-in, an approximation. The realisation of this accumulates as the film progresses, as you watch Cwynar pose, deadpan, alongside a car, slowly caressing its headrests and door handles. Watching rolls of printouts of paintings being folded over each other, and then several framed paintings being wheeled out for photographing, a hand holding out a light meter in front of them, only drives it home further. We see most things indirectly, through reproductions, reprints and renditions. At one point, a woman’s hand hovers across Rubens’s Massacre of the Innocents (1612), its shadow caressing the painting. It’s not that these versions aren’t real – we are experiencing something; it’s just that all we’re ever seeing is another approximation, and that the shadow’s caress is as close as we can ever get.

Red Film is of a piece with Cwynar’s other film and photographic works: meticulously staged, dripping with analogue nostalgia, overflowing with ephemera that looks like it was forgotten in the back of your grandmother’s dresser for years. What look like mood boards for photoshoots become works in themselves, and the trappings and staging of the photoshoots become another means of framing, say, a discussion of a colour trend in Rose Gold (2017), or, as with Red Film, to try and think about how we make sense of anything in a world of appearances and hyperrealities. Cwynar manages to combine a preinternet demeanour with the overloaded feeling of social-media browsing, with snippets of imagery and opinions flying around you; some stick, some just whizz by. The emphasis on older media – the faded photographs, the 1970s font of the titles, the celluloid colour grading – also seems like a means to indicate a deliberate distance, to ask us to recognise that we, too, are situated in a particular time that will, not long from now, appear equally outdated. “Yes,” the female narrator admits, “I am looking for a shortcut through the complexity and conditions of historicity of my own age; yes, there is some nostalgia here. I’m just trying to be my best self.” Turns out your best self is made of many people anyway, as the closing credits reel off a 20-strong list of writers and thinkers whose words help make up the script: Boris Groys, Bjørnar Olsen, Susan Stewart, Sylvia Wynter and a fair chunk of psychoanalytic and postmodern bigwigs, a ventriloquist’s collage of cultural commentary.

Red Film throws us into a sea of tchotchkes and stuff, awash with competing ideas, veering between, on the one hand, an idealistic hope for a democracy of choice and abundance, and, on the other, a more cynical wariness of drowning in the deluge. During the late 1960s, Italian-born Brazilian architect Lina Bo Bardi devised a display system for her open-plan designs for the São Paulo Museum of Art: concrete blocks, with glass panes that would hold paintings and drawings to face the viewer, with information on the back. The idea was to force viewers to look first, but also enable most other things hung in the room to be visible at the same time, to democratise art history. Cwynar’s incessant pans over layers of postcards and photos, conveyor belts of trinket boxes and toiletry bottles, hold the same levelling impulse: we each accumulate our own museum, a concise art history of its own, in our drawers and shelves. But the relentless commercialism of Cwynar’s subjects also implies a stasis, getting stuck in all that junk. In 2001 Dutch architect Rem Koolhaas wrote a gnomic text coining the idea of ‘junkspace’, describing the sort of ad hoc mallification of landscape that was taking over, the unthought-out actuality that fills the majority of the built environment, ‘what coagulates while modernization is in progress, its fallout’. Both Bo Bardi’s pan-temporal vision and Koolhaas’s facile despair feel relevant here, not only as outdated ideas that still manage to have a pull and resonance to them, but also in describing physical spaces to be navigated, a problem that the film constantly poses: among such a jumbled accumulation, how do we each make our own way?

On the surface, Red Film seems to offer a touchy-feely solution to this in the tactile pleasures of the body. “The body is still centre, a constant measure,” we are told, as the dancers gather around one of their number, removing her red overcoat. Our final message before the film ends is simply, “The human body conserves itself. So does the society.” Though, despite this insistence, the thing that looks most fleshy, most bodily and real in this film, is the makeup: thick glops being squirted into pots on the conveyor belt, a brittle, leathery hide churning out of a machine, a tonguelike glistening slug of some product sitting on a roller. The last shot is of a splodge of thick red liquid, running slowly down a tray, like blood. This gloopy mass of dark red – burning into our retinas and still ungraspable – this, the film suggests, is our actual body, an artifice made up of shadow play, this imaginary red stuff pulsing rampant through our eyes and veins. A body, built out of superficiality, that runs on the octane fumes of the anxiety of influence, for whom wearing colour is the only task.