Ryan Wallace is featured on RISD 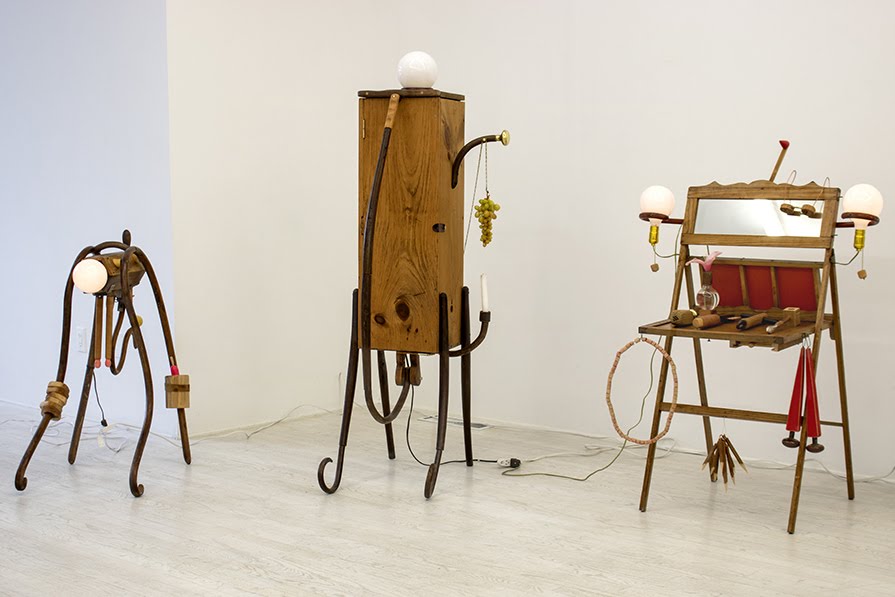 At Halsey McKay Gallery, Ryan Wallace 99 IL showcases work by many of his RISD peers, including Colby Bird MFA 04 PH, whose recent exhibition Unavoidable Blemishes is pictured above.

While his own work is represented by Susan Inglett Gallery in NYC, Romer Young Gallery in San Francisco and Cooper Cole Gallery in Toronto, for nearly 10 years painter Ryan Wallace 99 IL has been running Halsey McKay Gallery in East Hampton, NY. There he presents an eclectic and experimental range of international artists and programming and represents mostly emerging and mid-career artists, many of whom he first met at RISD. Here Wallace reflects on balancing his work as a gallery director with his own artistic practice—while also raising two kids and keeping optimistic despite the capricious nature of the contemporary art market.

What inspired you to launch Halsey McKay back in 2011?
The gallery really started as a conversation. “Wouldn’t it be cool to give artist Joseph Hart 99 IL a show in a barn out in the Hamptons? I bet we could sell it.” But we couldn’t find free space and we [Wallace and former business partner Hilary Schaffner] decided that if we were going to spend money on something, why not rent an actual gallery? So, we started with a six-month lease, and now, nine years later, we represent 18 artists.

How is the gallery holding up during the pandemic?
We have one employee who helps out a few days a week, but it’s pretty shoestring—which is why I think we’re still in business. My wife is really great with the books, and I do the photography and the website. There are a lot of realities to the commercial side of the art world that aren’t romantic. It’s not for everybody.

How has your approach to exhibiting and selling art evolved over the years?

What I’ve learned is that there’s no way to predict what is going to sell. Things come in and out of fashion: hot artists, hot galleries. I don’t want to sell something just because it’s popular at the moment. Being comfortable with what you put out there is the best long-term goal, emotionally and financially.

Many of the artists you now represent are people you went to school with at RISD, right?
Yes, I don’t want to exclude artists who have been [working in the Hamptons] for a long time, but I opened this place to provide my peers—my community—with a voice. That’s what makes it continuously fun. I mean, the work has to be amazing—that’s step one—but it’s also about personal relationships.

Have you adjusted your approach to online curation while your gallery has been open by appointment only?
In a weird way, more people are seeing the shows now than in the past because everyone is pushed online. There’s a tsunami of new “viewing rooms” out there, so we’re trying to offer something different online: smaller, more affordable works and essays about the artists by other artists. David Kennedy Cutler 01 PT wrote about Glen Baldridge 99 PR and Ethan Greenbaum about Elise Ferguson.

Do you find it difficult to balance your own painting practice with curating and running the gallery?
It’s a question of time management, which I’m pretty good at. I set aside days that are studio-only and vice-versa. And being in the gallery—handling things, seeing how they’re put together and installed—gives me ideas, less stylistically and more technically. I have a much bigger skill set than I used to.

What’s your own process as a painter?
I generally paint on linen or canvas and everything is made flat on the floor. I look at incidental marks that build up in the studio—paint drips and footprints—and then make shapes out of them. I’ll arrange things in a way I think makes sense, stretch it and then cut parts out and reassemble them, almost like collage. But it’s actually one surface cut and taped together in the back with aluminum and fiberglass tape.

It sounds very fluid and intuitive.
I like things that feel worn, like they’ve lived a little. I grew up skateboarding and looking at punk rock zines and that’s embedded in my DNA.

Why did you choose to major in Illustration instead of Painting?
When I was at RISD in the ’90s, the Painting department was more experimental, and I was looking more for technical training. I really wanted to be an illustrator and thought that would one day finance a fine art career.

So, did you do both illustration and fine art during the 12 years between graduation and launching Halsey McKay?
I worked as a graphic designer at Nickelodeon Magazine for 10 years. The magazine closed when my wife was pregnant with our first child, which really forced me to think about these issues. Should I hustle and try to get another job I hate with health insurance or show my kid that it’s more important to do something you love?

Is that the advice you’d give current RISD students and new graduates? To focus on making their own work and skip the day job?
No, you should start by getting a job, definitely. There’s too much emphasis on making a living solely off your art. That’s too much financial pressure. But if you keep making your own original work, commerce and opportunity will eventually intersect. You just have to be ready when it happens.