Kara Hamilton’s “We the People” series for Salon 94 is featured on CBC Arts. 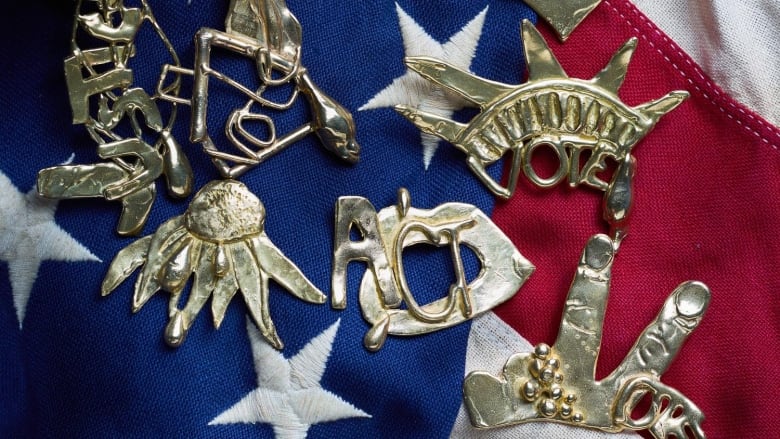 South of the border, “vote” is the word in fall fashion, and you can find those four letters slapped on $50 T-shirts, over-the-knee boots and designer face masks. “Vote Merch is Officially Fall 2020’s Most Popular Fashion Trend,” InStyle declared in September, a month after Michelle Obama’s V-O-T-E charm necklace went viral at the Democratic National Convention. And the internet’s awash in articles about where to buy the same statement-making gear worn by Oprah or Hailey Bieber: hoodies and pendants and tote bags emblazoned with some variation of the verb.

There’s something profoundly American about making a shopping event out of the democratic process. But the most brilliant (or cynical) twist in the whole vote/voting/voter merch phenom is how the singular joy of buying stuff is now a strategy to get folks to the polls. The most covetable items tend to benefit a cause, usually a non-partisan org for boosting civic engagement. When We All Vote, one of the more notable examples, drives voter registration by harnessing the hype of a product drop. (Meredith Koop, Michelle Obama’s stylist, is the creative advisor.) Score an exclusive Marc Jacobs sweatshirt or pair of crew socks from Brother Vellies (the brand of Toronto-raised designer Aurora James), and a QR code linking to registration info is printed somewhere on the product.

Right on trend, it would seem, is We The People, a series of election pins by the Toronto-based artist Kara Hamilton. And indeed, The Strategist (New York magazine’s shopping site) praised one of her brass brooches as being “genuinely nice-looking, non-cheesy vote merch.” Sold through the gallery Salon 94, all proceeds from the collection benefit two non-profits: FairVote, a non-partisan organization for electoral reform, and Earthjustice Action. And the series, which includes one-of-a-kind items and limited-edition multiples, is undeniably political, though a bit more abstract in its messaging than, say, an Old Navy graphic tee.

Among the collection’s more straightforward statements, there’s a pin in the shape of a house — gooey brass flames shooting up the side of it. In the centre, Hamilton’s bent a thin rod of metal to read “vote.” It’s open to interpretation, of course, but a literal house on fire sure reads like a nod to the moment. When the acting president is sowing doubt about mail-in ballots and side-stepping questions about the peaceful transfer of power, a word like “vote” isn’t exactly neutral anymore — which might account for the “vote merch” zeitgeist in the first place.

“Vote” appears on several more of Hamilton’s pieces, too. It’s splashed across a screaming mouth, a rainbow, a cloud of fire, weeping birds. “My two favourite issues, and probably the most important issues, are climate justice and election justice,” says the artist.

Big, gooey teardrops hang from almost every pin. “I started to think about tears because of the way I’m feeling, probably.” But Hamilton says they’re just as much a reference to blood or sweat or COVID-spreading airborne droplets. “There is an explicit message, I think, with most of the pins, although some people have had questions like, ‘What does the crying daisy mean?'” (The short answer, she says, is global warming.)

“I wanted to make things that responded to ideas that wouldn’t necessarily end after the election.” Still, it’s the current presidential race that prompted the series.

Based in Toronto, where her exhibition Water in Two Colours appeared at the Art Gallery of Ontario last year, Hamilton has strong ties to the States. She spent 20 years in the country and studied sculpture at Yale. “I’m a dual citizen. I moved back here a number of years ago now, but I was getting super frustrated with not being able to feel active and participate in the demise of American culture,” she says, chuckling. “And so I just thought I could put the tools that I know to work, and make quote-unquote election pins.”

Living in Canada, it’s definitely going to affect me, the outcome of this election.– Kara Hamilton, artist

Hamilton’s long produced wearable work, typically using salvaged metal to fashion rings and necklaces and crowns. “I’m a sculptor, but I always have had this kind of adjacent jewelry practice,” she says. “Critical decoration” is her word for it — “meaning critical as necessary and critical as analytical.” And as political fashion statements go, pins are an especially traditional format. “The whole idea of a pin or a brooch is sort of exercising an opinion of sorts,” says Hamilton, though she says she wasn’t picturing a specific consumer when designing We the People. The project started as something way more personal: “I just knew that I would want to wear one.”

That said, the collection’s promotional posters star a variety of ordinary Americans, all wearing Hamilton’s pins. A collaboration with the photographer Katy Grannan (an old school friend), the portraits were shot in Newburgh, N.Y., earlier this fall. Grannan sought to capture folks on both sides of the political divide, though their leanings aren’t revealed in the images. Republican or Democrat, Hamilton says all the participants were on board with the project’s basic message: vote.

To make the photos, Hamilton crossed into the States to join Grannan on location, but being a Canadian visitor was a non-issue on the shoot. “I don’t know if I talked about it that much,” she says. “I don’t think I would be doing this if I was only Canadian. […] But now that I’m living in Canada, it’s definitely going to affect me, the outcome of this election. Climate change is the perfect example: it doesn’t stop at the border.”

“I feel like any way to spread the word is important at this point. It feels sort of critical.”