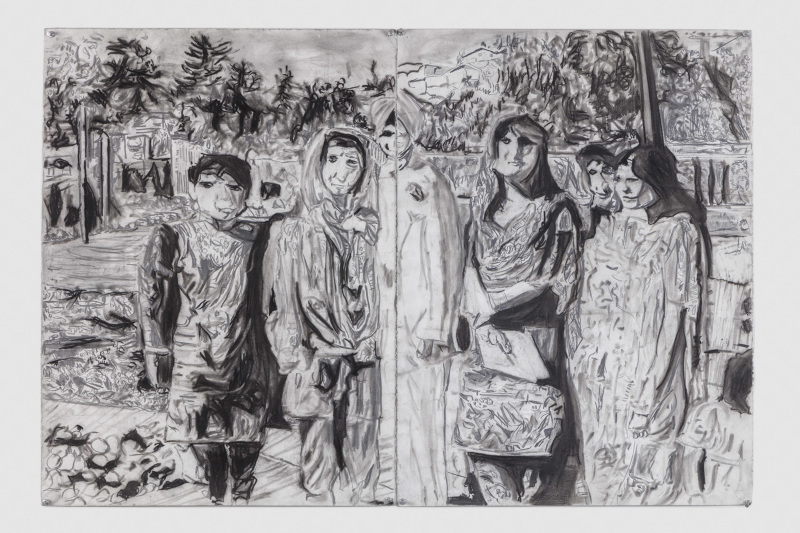 Amid the polarizing global immigration discourses currently seething, a group of Jagdeep Raina’s works on paper reassesses a historic episode among Punjabi populations living within Canadian borders. Working mostly from memory, the artist drew several archival photographs of a 1949 visit to a Sikh temple in Vancouver by India’s first prime minister, Jawaharlal Nehru. Nehru’s role in negotiating India’s independence had drawn the ire of many Sikhs, particularly in Punjab, whose 1947 partition along religious lines resulted in immense violence and the displacement of millions when India and Pakistan became independent dominions.Shades of gray embedded in the artist’s source photographs fall away in his starkly contrasting compositions, limned in dense thickets of charcoal. He locates a chromatic punctum in the figural embodiment of Nehru, and the pathos of this subject’s recurring presence pulsates viscerally throughout the exhibition. In the cinematically composed From dawn till dusk, we watched helplessly as you drove away, leaving us nothing more than these bitter tastes and memories, 2015, a large midcentury-style sedan slices through the foreground of a scene outside the West Second Avenue temple. In lieu of a noirish villain, the Indian leader, crudely articulated in cherry hues, gazes outward from the back seat. Two piercing black dots and a cartoonish, parabolic frown mark his visage while a shock of flames emanates from his head.

The nimble interplay of materials within these works rewards close inspection. Inconspicuously collaged paper cutouts echo fastidiously rendered throngs of people and towering architectural structures that stand like thinly stacked facades. In all their nuanced optics, they issue a call to consider the potential for photographic documents to continually resurface, resignify, and enable new narrative slippages among contested political histories.
— Jeanne Dreskin