NewsJerky Out, Gnar In
Georgia Dickie 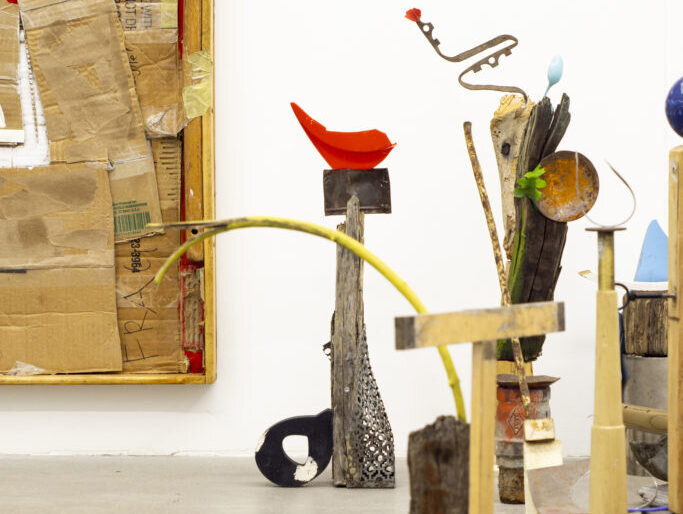 The exact moment that an object becomes art is highly subjective and is without a definitive or singular answer. Is it when an object is chosen with artistic purpose in mind? Or is it when the object’s original function is abandoned? Could the final transition be the labeling of the object as ‘sculpture’? And if so, who has the authority to do this labeling? The questions go on. Elsa Delage (sic) asks in her conversation with Georgia Dickie, the artist of Jerky Out, Gnar In, “Where does an object stop and the sculpture begin?”

Cooper Cole Gallery states that Dickie’s artistic practice starts with the collection of discarded objects and the assembly of these found materials to create her art. Among these objects, the most surprising for me in this show are plastic crow’s feet, measuring spoons, a tiny plastic foot, a prescription bottle, an Air Canada sticker, and a laundry basket. According to Cooper Cole Gallery, the objects in Dickie’s assemblages ignore the original values assigned to them and this purposefully creates new relationships between materials. The press release continues explaining that Dickie’s works appear physically and conceptually precarious and that the works remain liminal, as the objects are continually being adjusted over periods of time including during their installation.

Dickie explains that she brings the found materials to her studio space and that she lets them, “come to room temperature” as they need to settle within the new space. She continues saying that sometimes the objects will come into a work quickly and other times they can wait for over ten years. Dickie mentioned that her artistic practice is heavily based on intuition and that she cannot pinpoint exactly how she makes decisions but that they can be based on her mood, the news, and other factors that she may not even be aware of.

Dickie says that themes emerge from the work rather than being planned out beforehand. Cooper Cole Gallery points to the rejection of linear narratives, of essentializing categories, and of capitalist growth models; emphasizing Dickie’s use of the discarded products of hyper-consumerist culture. This methodology embodies a deep environmental consciousness.

Jerky Out, Gnar In was assembled during the COVID-19 pandemic. Dickie mentioned that she primarily traveled from her apartment to her studio which led her to pay closer attention to her familiar route. She became more aware of her own neighborhood and the kinds of objects in her vicinity that she had been overlooking.

Dickie said that Maquette for Dream Home was her way of getting as close to the feeling of playing make-believe as possible. A maquette is a model for a larger piece of sculpture, created to aid in the planning of how a final piece will be assembled and how it will look when it is finished (tate.org.uk). Dickie creates a surreal world on top of the table, an escape from reality made up of the remnants of the world that actually exists. The process-based aspect of her practice is apparent in this piece as the final installation includes the hi hat cymbals that held up the piece while she was working on it. She felt as though it was part of the piece and should not be separated.

Some of the works shows Dickie’s engagement with chaos, entropy, containment, and impermanence, as Cooper Cole Gallery explains. When she chooses flimsy materials, that would not stand by their own, Dickie applies layers of adhesive which makes their forms permanent. Maintenance appears as a ripped and taped up paper bag overfilled with papers that will spill over any moment but the work is solidified with glue. The title gives the viewer more to ponder than what can be seen, as maintenance is the process of maintaining or preserving something, perhaps speaking more to Dickie’s process of gluing rather than to the unchangeable final product.

A readymade plastic chair and its added parts, named Moment of Serious Poignancy (Throne), is captivating because of its title. Dickie explained that the naming of her works is similar to writing poems which are primarily based on how certain words sound and look good together. Reading the titles of the works while viewing this show gave these assemblages added charm.

Dickie’s works are stimulating both visually and conceptually. Wood, metal, plastic, paper, among various other materials create dynamic pieces. In the modern world where there is a rapidly inclining amount of discarded items these kinds of materials are taletellers of our experiences of everyday life, unveiling our expectations of the items that we quickly consume and then discard. Dickie’s works, as Cooper Cole Gallery states, subverts the way that we relate to objects and what we think sculpture is.