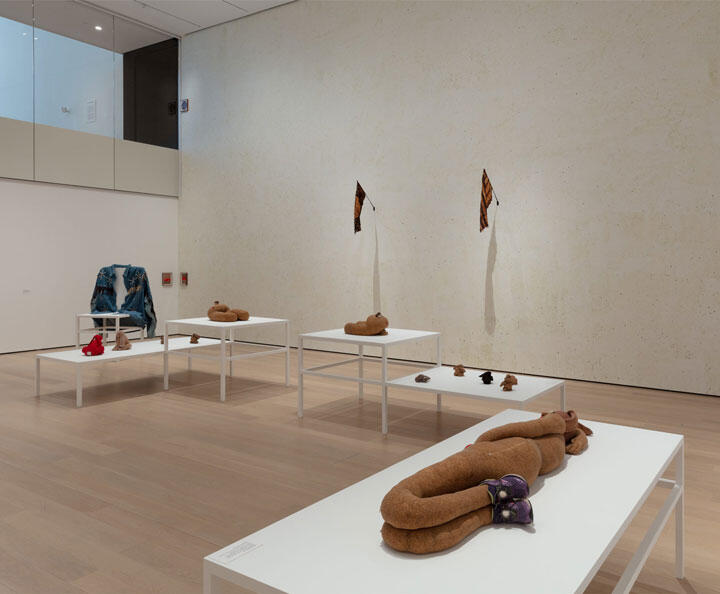 A multitude of flags hangs above a colony of plush bunny-human shapeshifters who recline, tease or kneel like sentinels on plinths resembling rabbit hutches. Aromas of tobacco waft throughout the space and suffuse the artworks by Gabrielle L’Hirondelle Hill, which are currently on view in the artist’s first US institutional solo at the Museum of Modern Art in Lenapehoking (New York). Ground and stuffed into sheer pantyhose to form plump, mammalian figures, tobacco is also infused in oils and used as a drawing medium, pressed and sewn into fragile drapery, rubbed on walls and rolled in cigarettes.

Tobacco is considered essential to physical, social and spiritual well-being in many Indigenous cultures throughout the Americas. Hill, a Métis artist who lives on the unceded lands of the Skwxwú7mesh, Musqueam and Tsleil-Waututh peoples (Vancouver), grew up using tobacco for gifting and ceremony, and developed an interest in how the practice has survived colonization, criminalization and capitalism. This exhibition builds upon ideas Hill presented in ‘Money’, her 2019 solo at Unit 17, Vancouver, which focused on tobacco’s role as the first exchangeable paper money in pre-Revolutionary America. Underpinned by plantation slavery and land dispossession, tobacco was exploited by colonists as cash. But, for Hill, its Indigenous usage represents an alternative system guided by an ethic of distribution and reciprocity.

The most recent sculpture in the exhibition, Counterblaste (2021), is a chimeric figure laying on one side. Her eight breasts are swollen – some painfully red – but she rests contentedly as if having just finished feeding her young. Her head is cradled in the nook of an elbow with her lop ears sprawled outwards and her feet, laced into scuffed running shoes that show the wear and tear typical of a busy mother, are tucked behind. The work’s title references a treatise written by King James VI and I in 1604 titled ‘Counterblaste to Tobacco’, a vitriolic pamphlet decreeing a personal distaste for smoking: a habit his fellow countrymen had acquired in the colonies and was fast becoming a favourite pastime. James’s treatise reduces tobacco to its association as a treatment for venereal disease, describing it as ‘a stinking and unsavorie Antidot, for so corrupted and execrable a Maladie’ – accompanied by his blistering condemnations of ‘barbarous people’, rooted in sexualized, racist hate. As a direct affront to the King’s masculine paranoia, Hill’s Counterblaste gives form to an Indigenous body politic that challenges conquest ideologies. The maligned sexuality of Indigenous peoples and the derogation of the tobacco plant are effaced by the gaze of this confident mother.

A sense of abundance characterizes the exhibition, yet Hill creates a productive tension that tempers notions of wealth. Desperate Living, for E.S. (2018) is a giant denim jacket fringed with locks of hair and beaded with beer-can tabs, pendant charms, cigarettes, dried flowers and lacquered, press-on nails. The jacket hangs off the back of an oversized chair, suggesting another presence that may have left, momentarily, using the outerwear to save their seat. Despite the familiar urban sensibility, there is an uneasiness to the work, whose evocation of desperation looms large. Desperation is, perhaps, one of the spectral forces that the smoky suite of drawings along the perimeter walls, ‘Spell’ (2019–20), are cast to repel. Many of these drawings have been gifted to her friends, surrounding the exhibition with a spirit of generosity. As a whole, the exhibition builds upon the artist’s longstanding engagement with Indigenous economies. Hill’s artworks evince the power of materials to shape events in the world and gesture towards ever-new relations.