At the tender edge of violence: Fin Simonetti 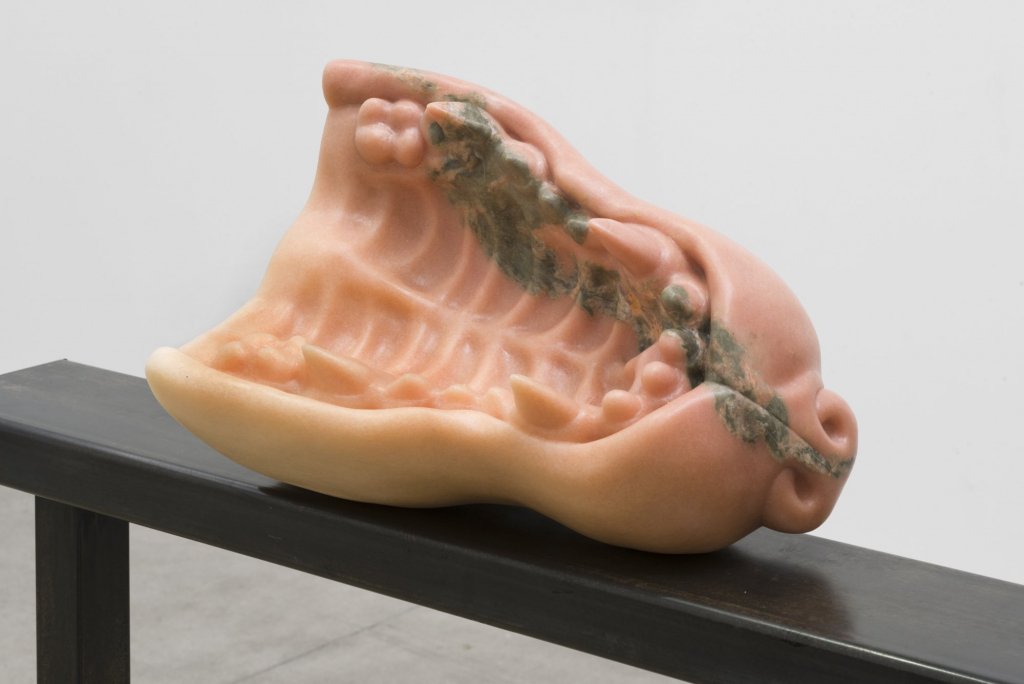 There’s a park in Manhattan near Union Square; it’s a beautiful park. There’s a huge spiked fence all the way around it, and a locked gate.” Only those who own an apartment close to it – that is, real estate – “have the key to get in.” Security, safety, comfort and protection, together with the symbols and beliefs that signal them, affirm themselves as a quiet, consistent conceptual presence across the work of Fin Simonetti. To her, such principles represent “the first layer” of human violence. In the artist’s imaginary, however, there’s no gore nor shock to be found. Instead, Simonetti’s cosmology softly treads in “places of ambiguity” by being grounded in the investigation of those slippery, ephemeral or subtly imprinted notions and norms that are used to define the way people should be, live, or think.

The work of Vancouver-born Fin Simonetti is interwoven with what she calls “a thread of violence,” a non-explicit factor that, running across a diversified, labor-intensive artistic practice as a subtext, silently unfurls through her iconography. Simonetti’s observation of masculinity, male identity and gendered performance – topics she’s been exploring extensively, across a variety of outputs – is tinged with empathy and compassion. Such features, rather than being by-products of a condescending gaze, emerge from the material quality of her works, as her Cathedral series or the exhibition Pledge reveal. The artist’s personal history played a significant role in the development of her perspective on the theme. “My dad died in 2016, and I was estranged from him for most of my life. There’s the loss of growing up without a father, and then there’s the loss of losing a father. There’s two layers of loss, impacted together.” Crucially, her sculptural approach manages to embrace an inner fragility by navigating complex feelings of alienation, which are originally determined by the act of looking at the pain of “contemporary masculinity” as a cisgender female, and have been ignited by “the double loss of a paternal figure.”

Within her research on the nuances of human violence, Fin Simonetti chose to linger on the study of a specific non-human creature, the pit bull, painstakingly inspecting its form through stone carving, a medium she began to test in 2017. “Animals are my entry point into thinking about people,” the artist states. Historically, they have been exploited in tournaments and gambling, as well as performance and blood sports, including hunting, bullfighting and dog fighting, chiefly as tools of masculine power and prowess. As the artist observes, the way we treat different animals – “right down to the sub-breed” – says a lot about how we interact with the world, and is a telling sign of the brutality inherent in our culture. To Fin Simonetti, the pit bull “epitomizes that.” She mentions how dogs are the animals we most identify with: “we take them into our houses, we let them sleep in our beds, we dress them up; they’re completely anthropomorphized.” Yet there are “certain breeds we made decisions about,” which are enforced through breed-specific legislation, as in the case of pit bulls. “In Colorado you can’t have a pit bull; it’s illegal. They’ll put them down if you have one.” In light of such a framework, supremacy and dominance emerge as explicit features in human behaviour. An animal can be a proxy as well as a weapon.

Across millennia, non-human creatures have often represented a path to transcendence, a way to reflect on the human condition; at the same time, they’ve been serving as scapegoats for our suffering and guilt, ultimately becoming “an extension of our own power” through subjugation. Interestingly, vulnerability and wounding are present throughout Simonetti’s universe as in that of Sylvia Plath (1), whose work the artist deeply admires and has referenced in one of her tracks, titled The Colossus. In Plath’s Pursuit, masculine passion, desire, dominance, and violation also coalesce in the figure of an animal, the panther. Written in 1956, two days after she met then-husband-to-be Ted Hughes, the poem exemplifies Plath’s prescient inquiry into the cultural ambivalence of  sexuality and power. The piece – overflowing with somatic metaphors and allusions to the erotic – appears to parallel the artist’s conception of the animal as a tool, and extension, of human tyranny and greed, pointing to an atavistic culpability, and summoning sacrifice as its inescapable consequence: Insatiate, he ransacks the land / Condemned by our ancestral fault, / Crying: blood, let blood be split; / Meat must glut his mouth’s raw wound (2).

In Fin Simonetti’s work, the dichotomy expressed by the conflict between “the body that is a threat” and “the body that is threatened” is persistently at play. For instance, “pit bulls” – the artist elaborates – “are actually more dangerous because we treat them that way. You’re more likely to get attacked by a pit bull because you’re more likely to run into one that’s been mistreated, used for dog fighting, and brutalized, so it kind of perpetuates itself.” To her, however, it’s about thinking how the same thing happens in other circumstances. “You can only push any creature so far before it absorbs that violence and becomes a weapon – an actual threat to you.” Fin Simonetti effectively puts into perspective the social, political, historical and biological implications of the relationship that ties the two principles together – which, through her art, cease to appear antithetical. In fact, they end up standing right next to each other, like “opposite sides of the same coin.” […]