ektor garcia is featured in Art in America by Glenn Adamson. 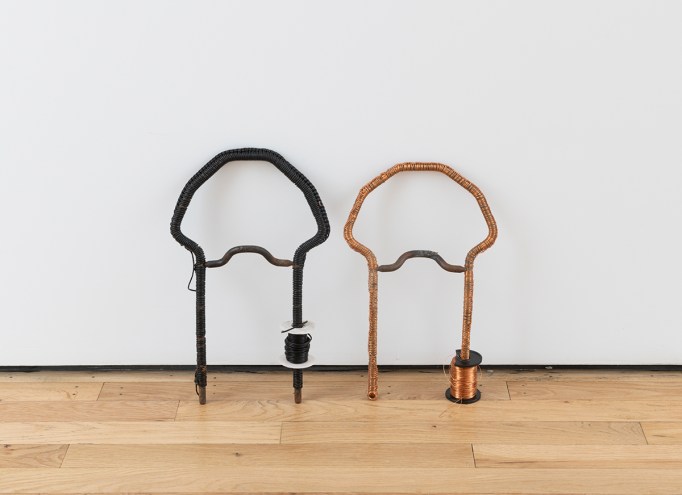 As you’re reading this, ektor garcia is probably making something. His hands are in constant motion, crocheting while he converses, marking his studio time by looping, linking, coiling, weaving. This is more than a work ethic; it bespeaks an idea of art as ongoing process. As he made clear in an August phone interview, garcia considers all his sculptures unfinished, by nature. When they leave the studio, or even enter a permanent collection, they are only “on pause.” If they do come back to him, they’re almost certain to grow and change, like young living things.

These days, garcia (who prefers his name rendered in lowercase) is based in Mexico City, where craft is part of the warp and weft of everyday life. He speaks with admiration of the women he passes on the sidewalks, plaiting straw hats and bags, making tortillas. “Their gaze down, they seem passive,” he says, “but they are actually highly conscious.” It’s a state he aspires to. He’s from north of the border, originally; born in 1985 in Red Bluff, north of Sacramento, he grew up there feeling alienated. He was, by his own description, a “brown queer punk.” But the restless energies of his youth have now found a home in Mexico—“my ancestors’ land,” as he calls it—and in his work, which involves tradition and transgression in equal measure.

In format, garcia’s sculpture hews closely to vernacular forms: textile hangings, large pots, sewn leather, metal grilles of the type one often sees in Mexican architecture. When brought together, these works have a glowering, imperturbable charisma. They could be the artifacts of some elder culture, perhaps encountered in a lightly frequented gallery in the depths of an anthropology museum. Look closer, though, and a contemporary sensibility asserts itself clearly. For starters, there is garcia’s obvious borrowing from S&M fetish culture. Many people had their first glimpse of his work in the 2017 exhibition “Trigger: Gender as a Tool and a Weapon,” curated by Johanna Burton at the New Museum in New York. That context brought the queerness of garcia’s work to the fore. His installation, titled cuiloni (a derogatory Nahuatl term for a gay man), had a quasi-domestic scale, with forms that recall carpets, furniture, and lighting. But the space was strangely weaponized, with spiky bits of ironwork hanging here and there, and chains draped through cage-like structures.

In Mousse, the critic Jeppe Ugelvig rightly warned against assuming that “garcia’s rope-tied, corporeal, sensual motifs signify a literal sexual kinkiness, or even serve as hints to his own sexual predilections.” In other words, these aspects of the artist’s work are not narrowly autobiographical. Rather, they should be taken as valorizing things that were once marginalized—homosexuality, effeminacy, and craft itself. When garcia was an art student—first at the School of the Art Institute of Chicago (SAIC), and then at Columbia University—he gravitated to fiber, metalwork, and pottery, partly because the faculty in those areas tended to be female, gay, or both. He was welcomed and nurtured among them. At SAIC, he worked with high-quality linen gifted to the school by the preeminent fiber artist Lenore Tawney. “I used it all up, it felt so rich,” he says, “and I felt so fortunate to have this material from a person I admired running through my hands.” Not every craft department yielded such a positive experience; the metal studio, for example, was a discomfiting “hetero, white, bro scene.” But garcia found his safe spaces, notably at the Columbia pottery shop, which he describes as being about the size of a closet. He often worked alone there, settling into a rhythm of unstinting production that he has continued ever since.

The artist’s constant accumulative process allows him to achieve ambitious scale, but in detail his works tend to be humble, unshowy. He often embraces modes associated with amateurism, like crochet and coiled pottery. Until the 2020 lockdown, he was frequently on the road, carrying works in progress in his backpack, employing lap-work techniques that could be taken up at a moment’s notice. The cryptic title of his recent solo show at Empty Gallery in Hong Kong, “Oax.D.F.L.A.N.O.H.K.,” alluded to this lifestyle of itinerant artisanship: the name stands for Oaxaca, Mexico City (historically abbreviated D. F., for Distrito Federal), Los Angeles, New Orleans, Hong Kong, all places he lived while making the works on display. Even when at “home,” he feels like an outsider to some extent. Since he didn’t begin visiting Mexico City until he was eighteen, he tends to identify with previous American artists who made their way there as émigrés, such as Leonora Carrington, Elizabeth Catlett, and Sheila Hicks.

This experience of continual displacement is reflected in garcia’s installations. Miscellaneous in their materials, slightly ramshackle in their organization, they often look as though they washed up with the tide. Transience is further implied by recurring vertical panels that the artist calls “Portals.” These works do indeed have the proportions of a door, suggesting the possibility of some metaphorical escape. Many of them, made from crocheted copper wire or leather, recall the openwork studio textiles that Tawney and others of her generation made in the 1950s. Impressively structured, yet mostly see-through, they offer a compelling play of presence and absence.

It’s a theme picked up in garcia’s recent exhibition at Prairie in Chicago, “ya me vine, ya me voy” (I’m came, and now I’m leaving). The title could be construed narrowly, as a reference to the artist’s momentary passage through a city he once called home, but it also has a broader connotation: a six-word manifesto, from a man always on the move. While it included one of his “Portals,” hanging from the ceiling like a black banner, the show primarily featured elongated teardrop forms, which garcia swiftly made for the occasion. (“I returned to Chicago two weeks ago,” he notes on the exhibition’s website. “Since then I’ve gone through 300 lbs. of clay,” a typical example of his generous work habits.) Candles nestled among the ceramic forms lent the proceedings a ceremonial atmosphere.

Also in the Prairie show were chains made of unglazed porcelain, short lengths that seem excised from a potentially endless succession. The artist remarks that the Spanish term for a life sentence in prison is cadena perpetua (endless chain), a phrase he used as the title for his 2019 exhibition at SculptureCenter in New York. During garcia’s time at SAIC, the legendary performance artist Tehching Hsieh came to campus as a visiting artist. “He said, ‘Life is a life sentence,’” garcia remembers. “I wrote it down in my sketchbook.”

For garcia, who was already developing an instinct for feats of creative endurance—albeit more pleasurable than self-punishing—it is not hard to see why Hsieh would have served as a powerful role model. No artwork is more impressive or more harrowing than One Year Performance (Cage Piece), for which Hsieh spent twelve long months enclosed in a wooden cage, silent and without any form of distraction. For One Year Performance (Time Clock Piece), commencing just six months later, Hsieh attempted to punch a time clock every hour on the hour, all day and all night, for a full year. These works were intended, in part, to reflect Hsieh’s status as an undocumented immigrant, a fact that made them even more resonant for garcia, whose parents had the same status.

For both artists, precarious legal status seems connected to a more general sense of contingency, the uncertain means by which we all relate to one another. A self-professed loner, garcia nonetheless has made it his business to dedicate himself to the idea of connection, in all senses of that term. Bound tightly to themselves, yet always open-ended, his works half beckon, tentatively floating the prospect of emotional attachment. They inhabit that vulnerable point where one person’s concerns might, just might, become another’s.

To view the full article visit Art in America.