An Interview with Daniel Rios Rodriguez 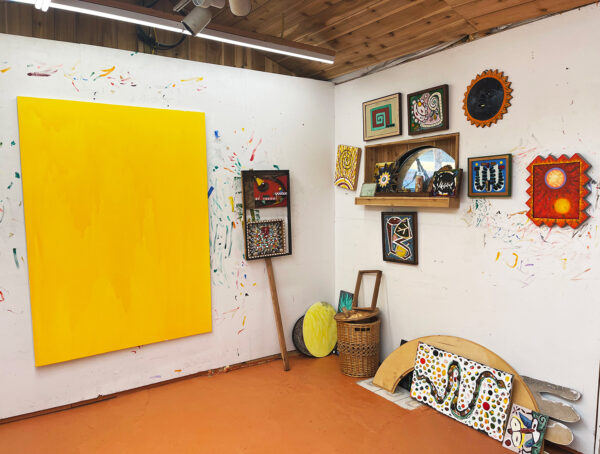 I met with Daniel Rios Rodriguez in early January at his studio in south San Antonio. We discussed his connection and commitment to the land, his family, and painting. His work is well known internationally and nationally, but has not received as much attention in his home state of Texas. Over the last three years, he has had solo exhibitions in Dublin, Los Angeles, New York, and Toronto. He received his BFA from the University of Illinois at Chicago (2005) and his MFA from the Yale School of Art (2007).

Colette Copeland (CC): Daniel, I really enjoyed visiting your studio and hearing about how you transformed the property from a condemned building with years of neglect and discarded debris into the magical working space you have today. Please share your journey of how you acquired the property and the renovations you’ve made, as well as how it has impacted not only your artistic practice, but the surrounding community.

Daniel Rios Rodriguez (DRR): Sometime in 2017, I came across a run-down property on the southside of San Antonio with a tattered and weed covered “For Sale“ sign. The property itself was being sold by someone who inherited it and owed years’ worth of back taxes, so they were eager to work with me on the price in exchange for the labor involved to get it off The City of San Antonio’s condemned list. The entire property was overgrown and filled with garbage and buried carpets. I‘ve spent the last four years cleaning up, rebuilding and planting trees. I demolished one of the illegal structures and gutted the 900 square-foot house to turn it into an open floor plan studio. It’s a complete work in progress, but the transformation has in many ways paralleled and facilitated the growth of my work and myself. At this point the studio is just as much a work of art as any painting or sculpture.

CC: We discussed the Theaster Gates model of social practice — making change through purchasing properties and dedicating the spaces to art/artists. How does your commitment to the community inform your painting practice?

DRR: Theaster has a far more ambitious agenda for his work as it relates to a social practice. For me, being a decent neighbor is important enough, and taking the time to talk to people in the neighborhood is a part of a small-scale social practice. My neighbors all know I‘m an artist and that I‘m there working daily.

CC: We spoke about your love for the river and how walking either alone or with your children influences your painting, be it collecting objects from your excursions or how the time spent in meditative reflection sparks your creativity. What is it about the river that continues to inspire you?

DRR: I‘ve always thought of the San Antonio River as being modest in the same way the city itself is modest when compared to other large cities in Texas. The river is a place that holds a lot of fascination, memories, and life for me. In the last eight years it’s become a place where I‘ve returned to for solitude or activity with my children. Over time, I have developed an affection for certain bends and paths. I’ve watched the trees and riverbanks grow and change alongside the changes in my own life. It‘s also become an extension of my studio and where I do most of my critical and open thinking. In terms of its material nature, I‘ve spent a lot of time drawing and collecting bits of rubbish that I’d incorporate into my paintings. Unidentifiable bits of plastic and metal became the color and texture of my work, the wildlife and wildflowers became the imagery from which I drew upon, and the symbolic content was/is that of my love for my children and of love more broadly. I would paint regardless of the river, but the river inevitably washes up in my mind as I work.

CC: You spoke about how, after living in Brooklyn, NY for three years, your move back to Texas radically shifted your work. How has the return to Texas affected the themes in your work, such as connection to land, physical space, and relationship to family?

DRR: Life is just organized differently in larger cities like New York. I felt I was always shuffling from one structure to another in order to survive, and the hustle to pay rent, raise kids, and paint was more than a full-time job. When my ex-wife, Veronica, and our kids, Paloma and Theo, and myself moved back to San Antonio, we essentially started over. It was at that point that I had massive amounts of time alone. I began to spend most of my time outside, because I found a studio apartment in the Lavaca neighborhood and was so close to the river. I also spent a lot more time reading, painting, and thinking about my kids who I was no longer living with. I missed what I had deeply, but was forging a new relationship with myself, with painting, and with San Antonio. The year I returned, I was also awarded the Louis Tiffany Comfort Foundation grant and that really did a lot for me in terms of giving me the time to work. In New York, I never felt I had enough time to work, and in San Antonio I had more time than ever. This changed everything.

CC: In reading the New York Times review of your 2020 exhibition, writer Martha Schwendener writes that your folk-art style is a conscious decision to dismiss the rules of Western Art History and formal painting. That comment does a disservice to your work. We spoke a bit about how Yale does not teach a specific type of painting and that you did not learn to paint a certain way from your time there. Rather, you were encouraged to experiment with finding your own voice, ideas, and tools for creation. In some ways, your work deconstructs the history of painting, but it also embraces your unique style. You bring in found objects and create your frames from salvaged materials. Your earlier work is not large-scale, like so many painters working today.

DRR: My education at both UIC and Yale was hugely important, but it was anything but formal in training. You did not attend either of these schools to become a certain “kind“ of painter, but perhaps rather to confirm whether you were or weren‘t one. This is my own opinion of course, but on the whole my education was undogmatic. (I am resistant to dogma on the whole, which is also why my stint in the Air Force was short-lived.) That being said, I really had no idea what to do with paint, so it was inevitable that material exploration became a matter of course. What anyone does when they don’t know how to do something is to try and fail and try again. The incorporation of objects and materials into my work was not only a way to overcome my inabilities as a painter, it was also a way of getting to the point. Why paint snake skin if I can incorporate one? Why paint stones and feathers if they are the very things I pick up along my excursions? At this point I am not sure why any of this is seen outside the bounds of a painter’s language, but it is understandable considering that most painting of the last 200 years has been a battle of paint on canvas. If we dig a little deeper and look beyond Western art, we see painting/sculpture/architecture and the natural world all sharing the stage and sometimes a surface. My desire to do just that but on a much smaller scale was a natural move for me and not a calculated one. It was a way to embrace my inclinations as a builder and my desire to paint. That in itself, to be a painter, is still very much a mystery to me.

CC: At one point in our conversation, you spoke about your philosophy of painting as a living space. That resonated with me on a deep level. Please explain what you mean by that.

DRR: Now Since I have a studio and basically a permanent work/live space, I am free of a kind of anxiety that so many artists and non-artists alike live with — that of displacement or at worst, homelessness. Artists need both the space and the time in order to articulate our energies and ideas. This is why residencies are so valuable. This particular kind of ownership of my own creative space has really allowed me to craft a daily ritual of entering into a painting space on my own terms and without fear. I come and go as I please, and the rhythm I’ve established in relation to the neighborhood, my dogs, my plants, and finally to my studio all serve to keep me painting.