Brie Ruais is featured in Garage by Osman Can Yerebakan. 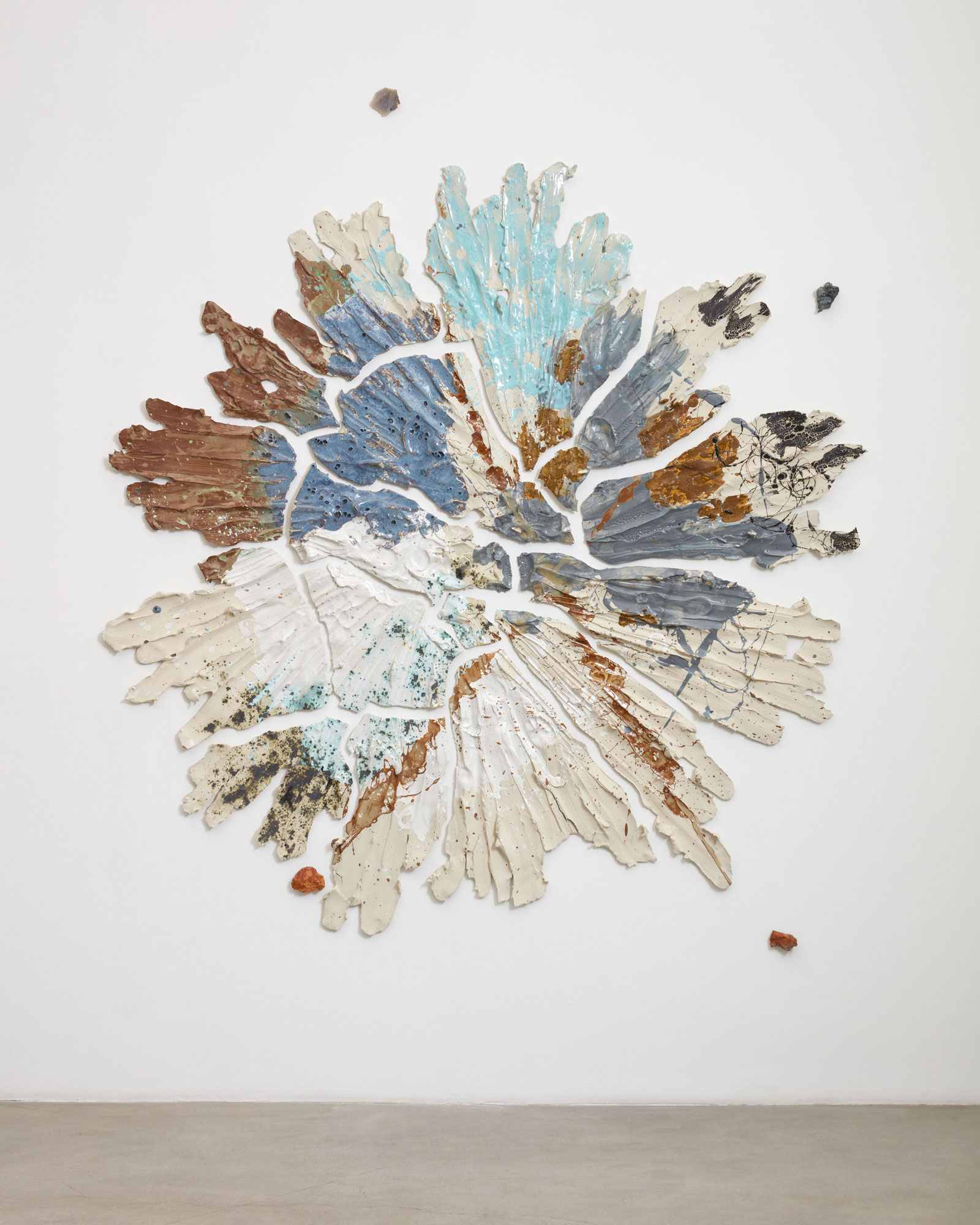 Artist Brie Ruais found herself in a former mining site while driving her truck through the Bureau of Land Management’s public lands in central Nevada. “I was in a ghost town and stumbled upon wild donkeys,” Ruais tells GARAGE over the phone. In the middle of a barren nothingness, a herd of untended donkeys was a surreal sighting, but she soon learned they were descendants of animals the early prospectors rode during their operations. “We, humans, can disappear but animals and nature will still thrive,” she saw firsthand.

The Brooklyn-based artist’s current exhibition, Spiraling Open and Closed Like an Aperture, at Night Gallery in Los Angeles hosts a mountainous floor sculpture that blossomed from this transformative two-week journey she embarked on from Utah to L.A. through Nevada. “On November 7th,” she remembers sharply, “I decided to use the clay and rock I had collected from this land where I felt extreme amount of intensity and division.” Earth, however, is still a mutual reliance connecting people immensely separated in their ideologies, so “I needed to bring some into the center of my show.” The things we build, the things we let fall apart, the things we destroy is comprised of two circles, separately made out of terra-cotta clay and porcelain clay, gently touching on their edges beneath a wall of rocks slicing through their unity.

Overall, the exhibition chronicles Ruais’ immersion into the desert, which started five years ago in order to break free from limits of a studio, but has recently reached new extents, both conceptually and physically. The distance the artist’s limbs can stretch determines her sculptures’ dimensions and embody Ruais’s meditative dabble with clay on the floor. Each form stems from an amount of clay equal to her body weight and reflects impressions of her movements. Think a sculptor’s fingers or a painter’s brush, for Ruais, her body is the tool and her instincts the trace. “A collaboration,” she considers this relationship with clay: “I am using a resistant material that proposes a challenge to work with.” Starting with her body weight equalizes this duello for both parties and tames her control over the source. “I needed enough material to allow for the body’s full expression and had to scale up to lose some control.”

Having the sun as the only witness to her solitude helps Ruais gain humbleness towards nature and its textures. “The realization that you are not the center of the universe,” she says, “is undeniable in that remoteness.” The expansively-laid sculptures on Night Gallery’s soaring walls echo with her terrestrial odyssey through bright hues of yellow and blue, as well as earthy tones of brown and red, all naturally formed during glazing. The artist orchestrates her patterns with rocks and rabbles from former missile testing sites in their natural color formations. “I use these colors to speak for the experience of standing in the desert and being totally overwhelmed by the sun.”

The juxtapositions reminisce solar explosions or alien marks—but do not attempt to rationalize what they represent. “We constantly try to explain our surrounding through logic.” Hallucinatory spirals and radiating starbursts emanate from what she considers “a recent receptivity and openness to what is beyond myself.” The show’s largest piece, Opposing Tides, Shaping Forces, is a fruit of a two-person endeavor, a kinetic harmony between two interdependent forces. Ruais and another person pushed two separate slabs of clay against each other. The emotional intensity of two bodies co-operating—whether it’s sex, wrestling or tussling around clay—is contained in this expansive horizontal form. Two winding entities almost match from their innards while two sharp rays approach from both ends. The physical process took around 10 seconds for Ruais and her collaborator, but the resulting imprint is colossal and radiant. “I gave them minimum instruction and the second we knew we were done, we walked away.”

Desolation is the protagonist in a series of photographs Ruais took of the soil with a drone camera. Seeing the land from aerial view helped her grasp its grandness and the humans’ ceaseless exertion for control. “I started to dig the center with an instinct to reveal more from beneath the dirt; it was not a premeditated search,” she explains the cross shaped signs in the photographs. They could be an homage to Ana Mendieta or peculiar extraterrestrial contacts, and the beauty lies in that mystery.

While cryptically sleek monoliths appear and disappear to our burning desire for an explanation, earth continues to make her own art on far-flung deserts. Ruais remembers her first reaction to ceramic sculptures New Mexico’s badlands yield two years ago. When the coal caught fire centuries ago, clay and dirt had turned into ceramics layered with color. “Seeing these beautiful piles of red ceramic shards, I asked myself, ‘Why do we need to make art?’”