Brie Ruais in The Brooklyn Rail

The Proof in the Print 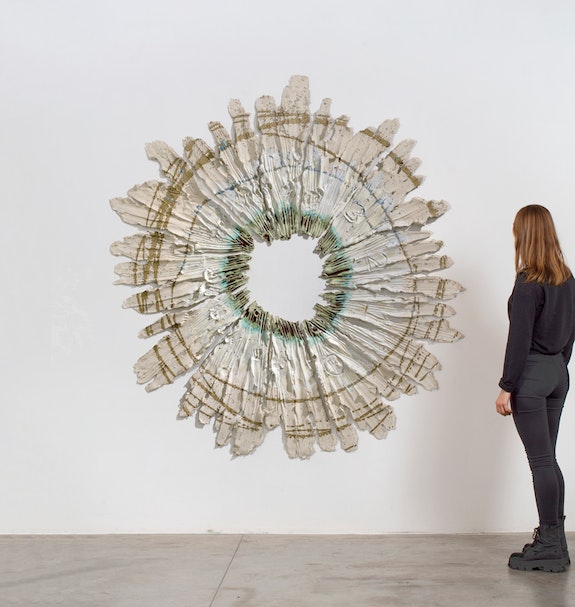 I used to know an artist who carried a small copper plate in her daily tote bag. It accumulated the scratches and marks made by other objects in her bag as they rubbed against each other with her body’s movement throughout the day.

I think of my body as that plate, accumulating all kinds of physical and psychical scratches from floating around in “this vast sack, this belly of the universe,” as Ursula K. Le Guin writes in The Carrier Bag Theory of Fiction. Like printmaking, my practice is indexical, but instead of paper as a substrate, I use clay. Clay, like paper, has a long relationship with human civilization, and in my practice, clay’s many connections to the human body produce meaning. They have a physical relationship through touch and encounter. They have a chemical relationship because both contain iron, water, potassium, sodium, calcium, and magnesium; and they have a metaphorical relationship: both perform as vessels and receivers.

I make most of my work on the ground out of 130 pounds of clay. I think of that mass of clay as a stand-in for the body. We are two bodies when the work is being made, and then one body departs (mine) when the work is done. The work is shaped by a series of gestures that constitute a performance: “spreading out from center,” “compressing,” “pushing landscape east or west,” “making space from the inside.” The work then moves through a series of transformations: it is segmented, glazed, fired, and then oriented vertically on a wall. The gestural impressions made by knuckles, hands, knees, and feet form the composition and surface of the sculpture. The sculptures are indexical, like the earliest handprints on the walls of caves, they point to me (the artist), and you (the viewer), and to the future when both our bodies will be absent and gone.

The clay also stands in for the earth. It is horizontal and beneath me, supporting my movement, holding me gently in place so I don’t float off into the atmosphere. With more time spent in the desert in recent years, my conception of my work shifted from the story of body-meets-body to body-meets-earth. I’ve been paying special attention to tire tracks on dirt roads, and coyote paw prints in dried mud. The print is an evidentiary record of a subject’s movement through the world. Proof of existence! Proof that a coyote, by now long gone, was once here, and not only that, but we know for sure it was in motion.

The fundamental inquiry of my practice, and maybe in all art, is existential. Proof of existence—that is clear through the marks that mirror back the self—but it also proves the root of all existence: relationality. Printmaking (as well as my work) captures the action of two things touching and separating. A third thing emerges from the relationship between the two: chance, change, transformation, magic. The favorite space of many printmakers (and ceramicists) is the moment when the paper is pulled away from the plate, or when the lid of the kiln opens, and the third thing emerges. It refers back to the two things that brought it into being, but they are rumors now.

To make Spreading Out and Counting Downward, 130 lbs, I used my palms and knuckles to spread the clay outward from the center, creating a circular form with a central void. As I kneeled into each push, the tops of my feet left indentations in six places as I rotated over the clay terrain. After spreading out the clay, I divided it up into 12 centrifugal pieces by tearing it apart. On four consecutive sections, working clockwise, I scrawled with my finger the numbers 3, 2, 1, 0. Glazed with a dry white crystalline glaze, the surface of the ceramic now appears bone-like, the footprints look like fossils. The numbers indicate a scrawler who has reached the end of their countdown. A countdown to what? A chance, a change, a transformation.

To view the full article visit The Brooklyn Rail